Make a summer resolution to read

On January first, many of us make New Year resolutions.  Why not do the same thing on the first day of summer vacation?  In particular, why not make a resolution to encourage our children to read? 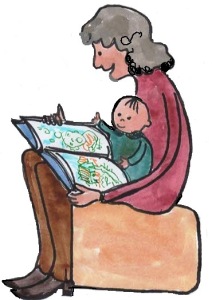 Here are some easy ways to get even the youngest readers reading. 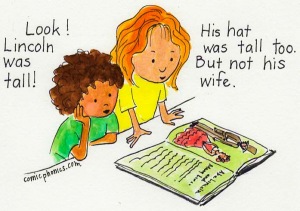 Breaking the habit of looking for word-for-word answers

I was working with a fifth grader the other day.  He read a passage and needed to answer questions about it in writing.   One question asked, “What is the value of doing X?”  He went back through the passage, turned to me and said, “It doesn’t say.”

I pointed to the paragraph containing the answer.

He read it again and shrugged.

“What are you looking for?” I asked to be sure he understood the question.

I “translated” the paragraph for him, pointing out what the value of doing X was, according to the passage.

“Because they are trying to get you to think.”

I see many kids like this one, unaccustomed to understanding a passage well.  They can operate at the “knowledge” level just fine, but can’t make that giant step up to “understanding” or “comprehending.”  They can’t “translate” an idea into a form required by a question.

What can a parent or teacher do to help such literal learners?

By fifth grade students need to expect that answers won’t be found word-for-word the way a question is worded.  Students need to realize they must bring their own knowledge to a reading passage.

When most children are four, they can say, or should I say sing, their ABC’s properly, except for the L-M-N-O part.

But can they pronounce the basic sounds associated with each of those letters?  I know they can’t.

Look at the disconnect between how letters are named and the basic sounds which those names represent.  In the case of vowels below, the basic sound is considered to be what has been called “short vowel sounds.”

Of the basic sounds of our language, only eight are represented by letter names which begin with that sound.  (Sounds represented by more than one letter, such as “ow” and “th” are not shown here.)

This made me wonder how important knowing the names of the ABC’s  is compared to knowing the sounds those letter characters represent.  I have concluded that it is the sounds which are important, not the names or graphics we assign to those sounds.

Since I discovered this, I teach letter “sounds” differently.  When I work with beginning readers, I try not to use words like “A,” “B,” and “C” when I refer to letters.  Instead I say the sounds those letters represent.  I say “a,” “b,” and “k,” and I ask students to do the same.

If you are teaching your child beginning reading in English, I recommend that you focus on the sound, not on the name of the letter.  The sound is what children need to know in order to read, not the name we give to the letter representing that sound.

If kids get low grades on reading comprehension, number one on my checklist is vocabulary. If kids don’t understand the words they read, how can they possibly understand the sentences containing those words?

But how to solve this problem? 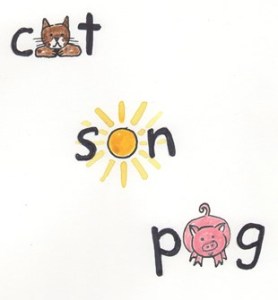 For ELL students lacking basic English words, I make flash cards: a picture on one side and the word or words used to identify that picture on the other side. A picture of a child pitching a baseball might use the words “pitch.” “toss,” or “throw.”

I start with pictures of CVC words: “cat,” hat”, and “bat,” for example. Picturing nouns is easy. Picturing verbs like “sat” and “win” is harder, and often I need to demonstrate the actions.

With my students I use the Explode the Code phonics series, so I picture vocabulary words in the order in which the student encounters the words in the series. To these I add a few sight (Dolch) words so that we can make sentences, such as “A cat is not a dog.”

Even for students learning advanced vocabulary words, like in the Wordly Wise series, this is true. They can define a word using a synonym but they have trouble using the word in a meaningful sentence.  (For many students using this series in school, their teachers do not assign the part of the lesson in which students write the new words in sentences, a big mistake.)

When I review already learned vocabulary words, I ask for synonyms, but also for usage. “It is a cat” works for beginning ELL learners. But “It is a catapult” does not work for older ELL students or for English-speaking students.

Another method to increase ELL learners’ vocabulary is to use picture word books meant for preschoolers. Because I want to use the vocabulary my students study to teach them reading, I prefer to begin with CVC words even though a word like “pizza” might be more frequently heard.

Before you can help students to read, you need to know why they can’t read. An umbrella statement like, “This kid can’t read” is too broad to be helpful. You need to be more specific in identifying the problem. For example, 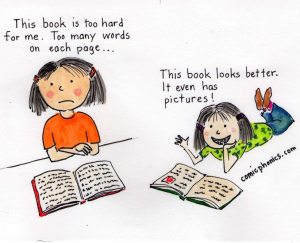 • Does she know how to read maps, charts, graphs and political cartoons?

• Can she decode CVC, CVCe and other one-syllable words?

• Can she segment and pronounce two-, three-, and four-syllable words?

• Does she struggle so much with decoding English sounds that she cannot take in meaning?

• Is her English vocabulary limited?

• Does she recognize prefixes, suffixes and root words?

• Does she apply punctuation when she reads?

• Does she read in a monotone without inflection or expression?

• Does she monitor her understanding as she reads, rereading whenever she realizes she doesn’t understand?

• Does she know how to use context clues?

• Can she predict what will happen next as she reads?

• Does she make inferences?

• Can she identify the main idea in a reading passage?

• Can she summarize a passage, paraphrasing?

• Can she detect author bias?

• Does she know how to think deeply?

• Does she believe she can read?

Reading problems can be divided into dozens of smaller, specific problems. And those smaller problems can be tackled—and usually solved—by a skilled teacher using appropriate strategies. 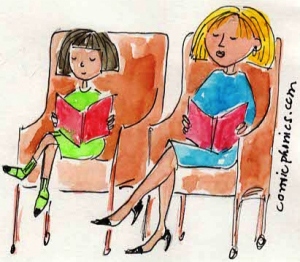 Parents and teachers can help poor readers develop the skills of good readers by asking questions about the reading passage before students begin to read.

First, the adult should read and understand the passage and the places where a student is likely to encounter comprehension problems.

Second, the adult should propose questions about the themes of the passage. Ask the students to read the title. What does is probably mean? If there are graphics, ask what they tell abut the passage.  Encourage students to notice and comment on these clues.

For example, suppose some struggling second graders will be reading Junie B. Jones and the Stupid, Smelly Bus. Some questions might be

• Is it normal for some kids to feel a little bit scared when they do something alone for the first time, like taking a school bus?
• Did that ever happen to you or someone you know?
• When some kids are scared, do they want to hide? Do you?
• Can a kid break school rules without knowing he or she is doing something wrong?

Finally, after students read the selection, return to the questions. Ask students if their thinking has changed. For some it might not have changed, but others will gain insights.

For this activity, fewer questions leading to deeper discussion is better than many questions with shallow discussion. If a question can readily be answered with a “yes” or “no,” follow up immediately by asking for an example.

Another way of using the questioning technique is to print a half-dozen questions on a handout. Next to each question have two columns, one labeled “before reading” and the other “after reading.” Under each heading students can write “yes” or “no.” This method forces students who might not want to engage in oral discussion to commit to an answer. Their written answers can serve as the start of a discussion.

It is the “why” behind the “yes or “no” which prepares students for gaining deeper meaning from the passage.

When is it most useful to discuss a reading passage with poor readers?

Is it most useful before reading? During reading? Or after reading? 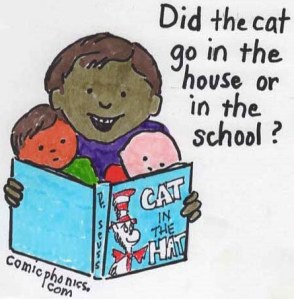 From my experience, engaging students while they are reading makes the greatest positive impact. It helps students pull greater meaning from the text they are reading, and it models the kinds of thinking good readers do.

What kinds of questions help?

• What does that mean? “That” could refer to a vocabulary word, a sentence or a concept.
• What is confusing or hard to understand? Often a teacher can tell that something the student has read confuses him, but the student doesn’t say so. Even if the student says, “I don’t know,” the teacher likely has ideas about what is difficult to understand. Identifying the problem—an idiom, a metaphor, a reference to another part of the text—and explaining it can be vital to the student’s understanding.
• Who is she? What is her relationship to ___? Sometimes poor readers fail to recognize relationships among characters or the role of a particular character in the text. Or they may fail to recognize that Jean Louise and Scout are the same person.
• What will happen next? Predicting shows students know enough of a story to say what is possible. Not being able to predict might indicate students are not following the plot or a character’s emotional response to a situation.

Modeling by an adult is important for struggling students. “Hmm. I wonder what Nate the Great will do next?”  Or “What is a spinning wheel anyway? I’ve never seen one. Have you?” Or “A red letter day? What in the world is a red letter day?”

Struggling readers need to see that asking questions while they are reading is not a sign that they are dumb; it is a sign they are intelligent. They need to know that good readers ask lots of questions as they read, and if they don’t know the answers, they find out—stopping in the middle of their reading to ask an adult, a dictionary or the internet.