When most children are four, they can say, or should I say sing, their ABC’s properly, except for the L-M-N-O part. 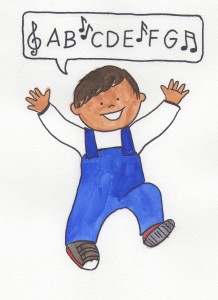 But can they pronounce the basic sounds associated with each of those letters?  I know they can’t.

Look at the disconnect between how letters are named and the basic sounds which those names represent.  In the case of vowels below, the basic sound is considered to be what has been called “short vowel sounds.”

Of the basic sounds of our language, only eight are represented by letter names which begin with that sound.  (Sounds represented by more than one letter, such as “ow” and “th” are not shown here.)

This made me wonder how important knowing the names of the ABC’s  is compared to knowing the sounds those letter characters represent.  I have concluded that it is the sounds which are important, not the names or graphics we assign to those sounds.

Since I discovered this, I teach letter “sounds” differently.  When I work with beginning readers, I try not to use words like “A,” “B,” and “C” when I refer to letters.  Instead I say the sounds those letters represent.  I say “a,” “b,” and “k,” and I ask students to do the same.

If you are teaching your child beginning reading in English, I recommend that you focus on the sound, not on the name of the letter.  The sound is what children need to know in order to read, not the name we give to the letter representing that sound.