My child is almost four. She wants to learn to read. Where do I begin? Or does it matter?

It matters, according to research. You should start with teaching her “the code,” that is, the connection between the sounds of the English language and the letter symbols we use to mean those sounds. Here’s how. (Look for more information on all these ideas in previously published blogs at comicphonics.com.)

Figuring out the code of written English is how a child begins to learn to read. There are lots of commercial methods to do this, but the best I have found is the Explode the Code series. Children find its combination of goofy pictures and sequenced phonics instruction fun.

Later you can focus on other aspects of reading including fluency and comprehension. But the place to begin is demystifying the code by connecting the sounds of our speech to individual letters and pairs of letters, and then combining them to form words.

Is it necessary to teach “r” words like “car” and “or” separately or should I include them with short vowel, CVC words?

Although children will pick up r-controlled words as they learn to read, it is a good idea to have a separate lesson on them since they are neither short nor long vowel words, and since “ir,” “er” and “ur” sound the same.

Just like it helps to have a reference word for short vowel words, it is a good idea to teach reference words for r-controlled words. I suggest you use nouns whose image is obvious to a child, such as

ar car, jar or star
or fork, stork or sword
er Bert (from Sesame Street) or fern
ir bird or skirt
ur church or turtle 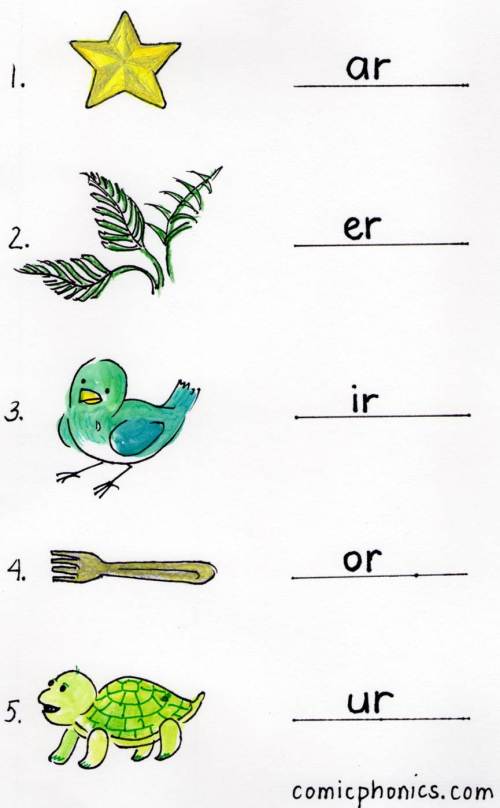 When you begin to teach r-controlled words, choose words whose spelling follows the rules, such as

Don’t choose “store,” “floor” or “boar,” or other words whose spelling varies. Start with one syllable words, and then move on to two syllable CVC-CVR words with twin consonants such as

Then put the r-controlled syllable at the beginning of the word, using words such as

At this point the student should be able to add consonants after the r-controlled syllable to create flirt, squirted and discard.

If your child has already learned CVC-CVC words, adding r-controlled words should be easy for the child. Even so, take small steps, and when he is ready, move on. As for “store,” “floor” and “boar,” you can tell your child that there are some variations in the spelling of r-controlled words. Rather than confuse the child at this point, when you are reading together, point out alternate spellings as you come upon them. –Mrs. K

How to use spelling tests to reinforce CVC words

Years ago, I would cut  pictures of CVC words from various sources, paste them on index cards, sort them by vowel sound.  Then I would use them as spelling tests for beginning readers. (Now Mrs. A draws the pictures, including those below.)  This low-tech approach still works great with beginning readers and spellers. 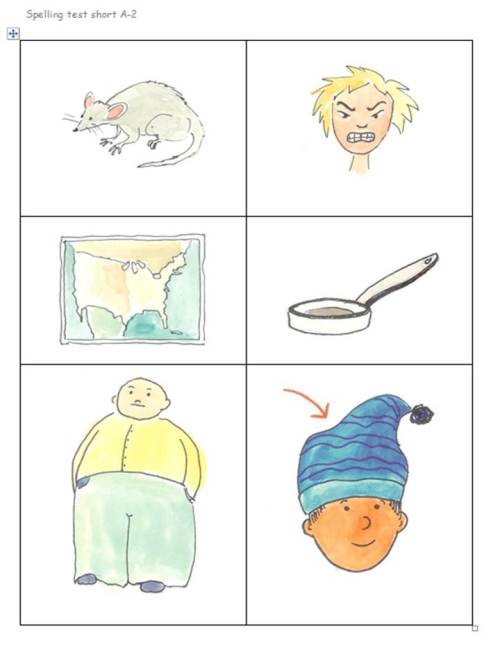 These drawings are samples of a packet of 12 pages of CVC drawings that can be downloaded for a small fee.  Click on the pictures for more information.

Why use pictures for the spelling test instead of just dictating the words?

One time I gave a preK student a short A test which he finished with pride—his first spelling test! When he found out I had more cards—more tests—he begged me to let him take the cards home and use them for the next week.  His mother later told me that  he took the spelling tests every day. What an eager learner!

When a child is learning to read, the child is learning to spell as well. Since most one-syllable, short vowel words (CVC) have three letters, all of which are pronounced, these words are usually easy for the child to spell. If you use letter tiles or cards with individual letters written on them, reinforce spelling as you and the child move the tiles around to form new words. At this stage, merging reading and spelling is easy. 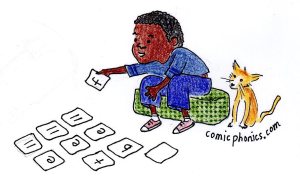 It is important to point out to the child that even though most of the time l, s, f and z are doubled at the end of short words, sometimes these letters are not doubled. So as not to confuse the child, list just a few exceptions to this doubling rule (pal, gas, bus, yes, us, and plus), using words that the child is likely to encounter.

Also point out that a few common words that don’t end in l, s, f and z double the final consonant even though most other words do not. Add, odd, egg, inn, and mitt are some examples that the child might read and use. When the child understands the concept of syllables, you can explain that this rule of doubling the l, s, f and z usually applies to one syllable words only. Many times children try to write “until” as “untill” (proving they have internalized the rule), so it is worth pointing out the correct spelling when the child is ready to learn two-syllable, short vowel words. –Mrs. K

For several weeks I have been tutoring a four-year-old, teaching her to read.

Because the lesson lasts just 30 minutes, this student hangs in there, but by the end of a half hour she is losing interest.  I compliment her work often, telling her, “You didn’t know that letter last week, and now you do!” or “You figured out that word all by yourself.”  Sometimes she acts out a word or tells me what it means, and I compliment her on that too.

These early lessons focus on letter sounds and how combining sounds gives us words.  It might seem boring to an adult, but brain research shows that there are no built-in pathways in our brains for reading, the way there are for movement and speech.  A novice reader, like my student, must activate much more of her brain to read “cat” than an experienced reader like me.  Over years of reading, my brain has built shortcuts to figuring out words that this child’s brain hasn’t done yet.

At our next lesson, we will do more CVC words using “u” as the vowel, and then exchange the “u” for “a” and “o.”  We will focus on letter sounds my student is still learning.  Her progress may seem slow, but it is steady.

Posted in English as a second language (ESL), how to make learning fun, letter sounds, methods of teaching reading, phonics

A little over a year ago, Mrs. K and I sat at my dining room table and made plans for a blog and a series of books for early readers. A month ago, December, 17, marked the first year anniversary of our blog. During the past year: 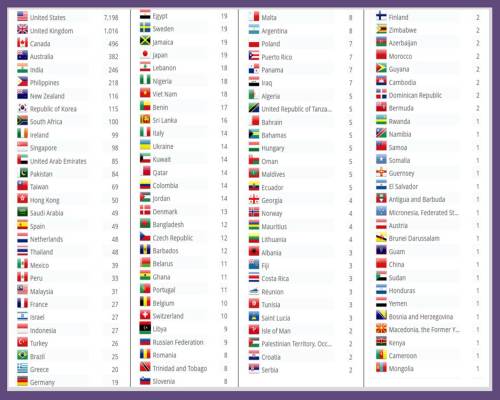 This information is useful in planning blogs for 2014. We thank you, our readers, for reading our blog, for leaving comments and for making suggestions for future blogs. Our goal is to continue to provide useful information for teaching little children how to read.

Tagged b and d mix up, CVC, vowel sounds

Our blog will continue to teach multisyllabic words in the near future.  Let us know if you find this information useful or if you have particular problems teaching your child reading.  We will investigate for you and offer the best advice we can find.  –Mrs. K and Mrs. A

My granddaughter can read small words, but she stumbles over bigger words when we read together. How can I help her?

Here are some tips to help with bigger words:

Our blog will have more on how to teach multisyllabic words in the near future.  Let us know if you find this information useful or if you have particular problems teaching your child reading.  We will investigate for you and offer the best advice we can find.  –Mrs. K and Mrs. A

When a child is learning to read, and is at the short vowel, one-syllable, consonant-vowel-consonant (CVC) word stage, the child often encounters words from the word family –ook (book and look, for example) or words that end with –ck (sock and truck, for example).  Strictly speaking, these word don’t follow the CVC rule for pronunciation, so they should be taught separately, starting with the –ck family words. 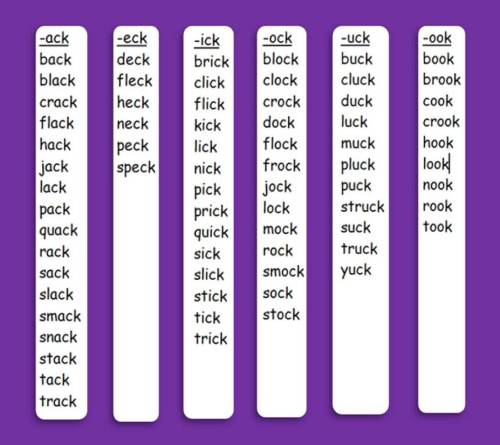 Usually there is no problem reading CVC -ck words once the child understands that –ck is a single sound.  But reading, pronouncing and spelling the –ook words can be a problem.  How can you help your child? 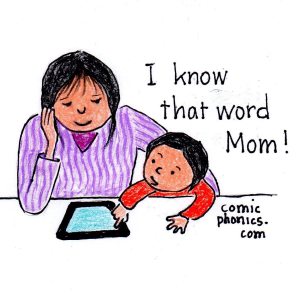 First, wait until your child is comfortable with CVC –ck words (see list above) to explain this difference.   Teach the CVC words that end in –ck first and make sure the child understands how to read, pronounce and spell those words.  Then introduce –ook family words.

At this point the child usually hasn’t learned how to read long vowel sounds, so there is no need to add to confusion by introducing words like bake and smoke now.

My child is struggling to learn short vowel sounds. What can I do?

As a temporary help, you could create word lists or flash cards using color-coded letters for the vowels. 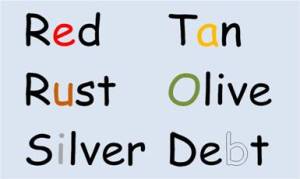 In Tutoring is Caring, Montessori teacher Aline D. Wolf suggests printing the letter representing the vowel sound in a particular color to help the child remember the sound.  She suggests using colors whose name has the letter sound that the child is trying to say.  So for example, short e words would be written with red e’s.  Since vowels are the most difficult sounds for the child to master, the color would alert the child that the colored letter is a vowel, and the color would also give the child a clue as to the letter’s pronunciation.

The colors Wolf suggests are

Wolf says it is important that the child recognize the colors using their specific names.  If a child sees olive and says green, then the clue that the sound of “ol” gives would be lost.  She recommends beginning with “e” and then “u” because they are easier.

Wolf wrote her suggestions in 1981, before personal computers, so today we have other options.  Using a computer, it is easy to duplicate these colored letters in words, just as using crayons or colored pencils makes it easy by hand.

Another suggestion she makes is to use broken lines for silent letters, a signal to the student that the letter is necessary but it is not pronounced.  This is easy to do if you are handwriting the letters, but I could not find a broken letter type face on my computer.  However, the computer offers other options such as outlined letters or highlighted letters, either of which could indicate silent letters.

With her lists of color-coded words, Wolf puts a drawing of a word that begins with that letter at the top of the list as an extra reminder of the letter sound.  So for short e, there is a drawing of an elephant; for u, an umbrella; for i, an igloo; for a, an alligator; and for o, an olive.

Cautioning that color-coding is a crutch, Wolf says it should be used as long as necessary, but that gradually the child should be weaned from the colors.  For children who don’t need the extra boost that colored letters give, they should not be used at all.