Teaching sounds, not letters, is where reading begins

The basic “code” of written English is sounds represented by letters.  Learning this code begins with learning to recognize the sounds of English.  Combining these sounds into two- or three-sound words is where forming words begins.  And this can be taught to children before they ever see a letter. 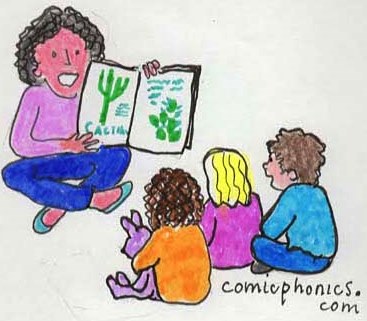 Because learning the code of written English is so important, learning to recognize its sounds should not be rushed.  A lifetime of reading, a career, the ability to support a family—so much depends on being able to read.

Kids need plenty of time and various kinds of interactions with sounds to learn to recognize sounds.  The younger the children, the shorter their attention spans and the more need for game-like ways to learn.

But the learning doesn’t begin with letters.  It begins with sounds.

I recommend you use several strategies to help your children identify sounds, working with your child one-on-one using manipulatives.  Why?

Your child wants nothing more than to interact with you. Putting down your cell phone and sitting by her side shows your child you treasure her.  And working with her on reading skills shows her how important you consider that knowledge to be.

Research shows that the more senses we use, the more likely we are to remember. If a child can touch manipulatives, hear you say sounds, say them herself, see objects when she says sounds and feel your warm hug when she learns, the learning will stick. Plus she will be relaxed and happy, in an emotional state which is open to learning.

Some of the strategies I recommend to teach tiny children how sounds form words are these.

All these activities can be done prior to ever showing your child a letter.  And they can be done with all 42 sounds in English.  Identifying sounds and understanding how they come together to form words is the basis of reading.  Save the ABCs for a later time.

One response to “Teaching sounds, not letters, is where reading begins”