I was talking to my friend about her summer visit with her grandson who is about to start first grade.  Together the two of them were reading a beginner reader.  The boy was reading the three- and four-letter words well. 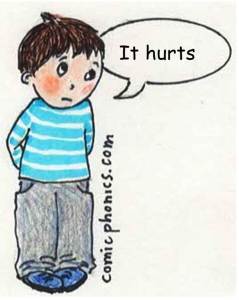 But when he came to a longer word, he would look up with sad, sad eyes  and say, “It hurts!”

“What hurts?” his grandmother would ask.

It would be a funny story if the pain the boy felt were not real.  I have seen this with other children too.

In particular I have seen children squirm when we first attempt  CVCe words after mastering CVC words.  That silent e at the end of words seems like an impossible hurdle:  so intimidating that children would rather stop learning than face it.

I’ve seen the fear, too, when children are learning how to read two-syllable words.  When there are twin consonants, as in “little” or “yellow,” and I tell them to split the word between the identical consonants, there is no problem.  But when we attempt to read syllables in words with different consonants between two vowels such as “Wilson” or “random,” the children freak.

Their fear is real.

One time I moved from CVC to CVCe words with a girl who had had no previous phonics learning.  She could read most CVC words easily, so I spent only a few lessons reviewing them before moving on to CVCe words.  She looked at those words as if they were spitting fire.  She stopped speaking, shook her head, crossed her arms in front of her and pushed back her chair.  We had reached the limit of her understanding, and she feared what lay ahead.

If this happens to you, I suggest

Figure out where the student’s learning boundary is. What has the student learned fairly confidently, and what next step brings on fear.

Begin each lesson with a review of what the student already knows. Compliment the student.  Make students believe in their abilities.

Introduce the next concept slowly, incrementally. For example, if you are introducing CVCe words, start with only one vowel such as a.  Don’t try to teach all five vowels in the same lesson.

Show the child similar words with and without the silent e, such as “cap” and “cape,” and “tap” and “tape.” Or “mit” and “mitten,” and “kit” and “kitten.”  Since replacing first consonants is easier than replacing second consonants, stick to the same second consonant for the first lesson.  Keep as much of the words the same as you can so there are fewer variables.

If at the next lesson the student seems to have forgotten the previous lesson, accept that and start again. Some children move quickly through phonics, and others move slowly, or stall at learning certain skills.

If the child learns slowly, advance slowly. There is no right or wrong length of time to learn phonics skills.  What you are teaching the child is a life-long skill, so if it takes five months to conquer CVCe, so what?  Over a lifetime of 80-plus years, isn’t it better to learn to read well than to forever “hurt” when you see hard words?