Does your child show a logical way of thinking?  Does your son delight in finding patterns?  Does your daughter love puzzles? 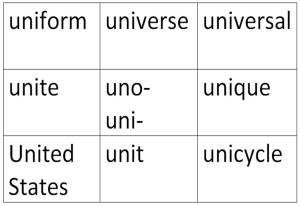 If a child can memorize a Latin root, he can find that root pattern in many related English words.  Thinking logically, he can assume that those other words are related in meaning to the original Latin root.

The Common Core State Standards recommend that children be introduced to Latin prefixes, suffixes and roots in third grade. But even kindergarteners can learn a Latin root a week and can infer the meaning of words made from that root.

For example, suppose a little kid learns that “mater” is the Latin word for mother.  A teacher or parent could introduce the words maternity, maternal, matriarch, matrimony, matron, and alma mater.  Even if the child can’t read, she can hear “mater” in those words and can assume they have something to do with a mother.

One easy way is to begin with the Latin and Greek roots for numbers.  Or try a word which is part of children’s lives, such bicycle.  Cycle, circle, circular, cyclical, encircle—it’s not hard to remember that they all have something to do with a circle.   Encourage children to propose their own words.  How about circus, a child might ask.  Yes, circus comes from circle.  Can you guess why?  Maybe because of the rings?  Maybe.