What does CVC mean? 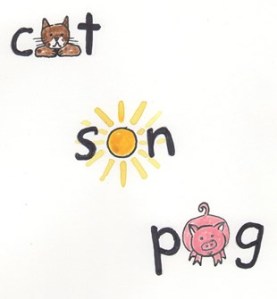 CVC words are usually the first words children learn once they know their consonant sounds and short vowel sounds.  In CVC words, all the letters are pronounced, and they are pronounced the way children expect.  So for example, the word “gas” would be included as a CVC word, but the word “was” would not be included since the “s” sounds like a “z.”

Almost all English reading systems based on a phonetic approach begin by using CVC words.  Children usually learn short vowel words first because what you see is what you get—no silent letters (late, heat), no digraphs that turn letter sounds into other letter sounds (chat, the), and no use of letters that have secondary pronunciations (has, sew).

Although many words in English do not follow rules of phonics, most of them do.  So teaching children patterns that work most of the time offers them confidence to figure out words that are new to them.

However, most reading books meant for beginning readers do not limit themselves to CVC words.  Writing a meaningful story using only CVC words is hard.  Even Dr. Seuss in The Cat in the Hat used words that do not follow CVC rules. (“The sun did not shine.  It was too wet to play.”)

If your child is ready to read CVC words, you could point to CVC words for the child to read in books, and you could read the other words.  If you own the book and don’t mind marking it, you could underline the words the child should know and take turns reading words in sentences.  Goodwill is an inexpensive source for such books.

This entry was posted in letter sounds, methods of teaching reading and tagged CVC. Bookmark the permalink.

One response to “What does CVC mean?”