How to teach words using ă and ŏ 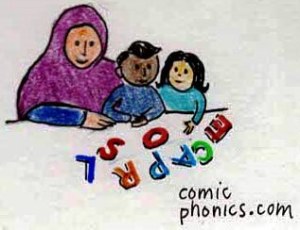 Explain what vowels are

Because you will be using the words vowel and consonant with your child as you teach, make sure you take time to explain what these words mean.  Vowel refers to five letters all the time (a, e, i, o, and u) and two letters sometimes (y and w).  Consonant refers to all the other letters and to y and w most of the time.  For now you can leave out the y and w, but when you teach small words like by and now, mention that y and w act as vowels sometimes.

Should you say short / closed vowels?  Or long / open vowels?

Today many support materials refer to vowels followed by a consonant in the same syllable (cat, hot) as closed vowels.  Years ago these vowels were called short vowels, and they were pictured with a curve over the vowel as in ă, ĕ, ĭ, ŏ and ŭ.  Similarly, vowels coming at the end of a syllable (go, hero) are today called open vowels by some reading support workbooks.  Previously they were called long vowels and pictured with a horizontal line over them as in ā, ē, ī, ō, and ū.  I will use the terms short and long since those are the terms most parents recognize.  I will use markings over vowels such as ă, ĕ, ĭ, ŏ and ŭ when referring to a particular short vowel sound and ā, ē, ī, ō, and ū when referring to a particular long vowel sound.

Naming vowel sounds as short or long is important because we need a vocabulary to use with children when we refer to vowels pronounced like their letter names and vowels pronounced more softly.  Whichever terms you use, make sure your child understands them.

Teaching words with a ă sound

While you are teaching the 16 consistent consonant-letter sounds, you can begin to teach one short vowel sound.  I recommend starting with the letter ă because almost all phonics support materials start with the vowel ă, and because ă might be the easiest short vowel sound to master.  The support materials I suggest for my students are the Explode the Code series.  That series starts with ă words.

When I am teaching in person, I use flash cards with pictures of words beginning with ă such as alligator, astronaut, and apple.  I recommend you teach your child to say “ă as in apple” to reinforce the letter connected to the sound.

Choose five or six consonant letter sounds your child has mastered.  Using letter tiles, form two and three letter words such as am, an, at, bat, bam, tan, and mat, etc.  Place the letter tiles for one word an inch or so apart and ask your child to say the sounds, keeping the picture of the apple on the table too, for reference.  Repeat saying the sounds as you slowly move the letters closer and closer together until the child says the word.  It might take many tries, but usually there is a Eureka! moment when the child realizes she is reading a word, not just letter sounds.  Reading teachers call these tiny words CVC words, meaning consonant-vowel-consonant words.

Gradually add more consonant sounds and form more words with ă as the vowel sound.  If the child loses interest, one way to extend the lesson is to use her name and write a goofy sentence such as Kim is a pan or Kim is a map.  Another way is to use your name and have her end the sentence.  Mom is a ____.  Teach her that the vowel goes first or in the middle.  Try mispronouncing a word she writes and ask her if you said it correctly.

You can buy magnetic cards which you can cut into small rectangles to attach to the back of letter tiles.  Then you can work in a metal lasagna pan or pizza pan or on the refrigerator.  If your child is four or five, a short lesson (ten minutes) teaching in one mode followed by another short lesson in another mode (writing words on an iPad or laptop, writing in a workbook) might be all she can handle for one session.  I have given one-hour lessons to a four-year-old, but I needed to have six mini-lessons to sustain her interest. 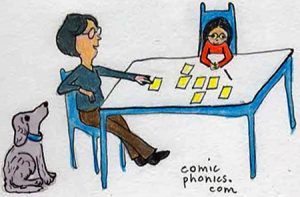 Teaching words with a ŏ sound

To reinforce your work, read together picture books.  When you come to a word she can pronounce, point to it and ask her to say the word.  Two or three times are enough to show her that what she is learning applies to her real world.

When you are learning how to teach your child to read, you need to familiarize yourself with a few  words.  If you read widely about reading, you will encounter these words all the time.  But even if you don’t, understanding them will make reading instruction easier to follow. 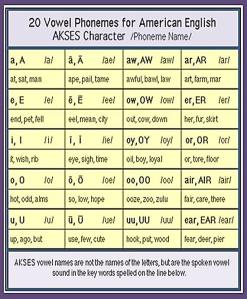 One such word is “phonemes.”  The smallest sounds we utter are called phonemes.  About 48 such small sounds exist in standard American English. These sounds are not letters; they are sounds to which we pair letters in order to read and pronounce sounds.  Some words such as eye have one phonemes (a long ī), but most words have two or more phonemes.  Snow, for example, has three (s, n, ō).  Putting together phonemes to form words is an important reading skill.

Another important word is “phonics.”  Phonics means combining phonemes to form words.  For example, the phonemes b, ă, and t combine to form the word bat.  250 letter patterns represent the 42 to 44 phonemes in American English.  Most children cannot figure out phonics on their own. They need instruction to match a phoneme to a letter or to a pair of letters.

For more details on the sequencing of learning sounds, go to http://www.naeyc.org/files/yc/file/200901/BTJPhonologicalAwareness.pdf.  While you are there, check out 1) the list of read-aloud books that emphasize sounds, and 2) activities you can do with a child who is learning sounds.

Short and long are a traditional way to describe certain vowel sounds.  Short vowel sounds can be said quicker while long vowel sounds take a fraction of a second longer to pronounce.  In recent years, the terms closed and open are used the same way to mean, respectively, short and long.

A consonant is a speech sound made by partially blocking the air as you breathe out.  Most phonemes are consonants, but they cannot be pronounced without connecting them to vowels. American English includes the consonant phonemes b, c, d, f, g, h, j, k, l, m, n, p, qu, r, s, t, v, w, x, y, and z.

Syllables are units of sound containing one vowel phoneme and usually one or more consonant phonemes.  Mitten has two syllables:  mit and ten.  Robotics has three syllables:  ro, bo, and tics.