Can listening to music help kids to focus?

Yes, it can if it is the right kind of music.

For work requiring focus and concentration, children should listen to instrumental music with no voices or lyrics.  Such music works even better than ambient noise, such as a ceiling fan or hair dryer in the background.

If listeners become accustomed to hearing the same kind of music when learning, they respond repeatedly in the same way, much like Pavolov’s dogs in his famous experiments.  Children learn to associate a particular stimulus—the instrumental music—to a particular behavior—focused attention.

On the other hand, for work requiring little thought but a great deal of energy, children should listen to music with a quick beat and energizing lyrics.

Why does music help?  Listening to music releases a chemical called dopamine which turns on different parts of the brain known to be important for learning.

Kids who retain primitive reflexes can have reading, writing problems

Babies are born with primitive reflexes—automatic physical responses that increase their chances of being born properly and of surviving infancy.  These same primitive reflexes, if they persist beyond the first few months of life, can indicate poor physical functioning in the toddler, and reading and handwriting problems for the young child.

Some common primitive reflexes include:

Moro Reflex (or startle reflex):  This reflex has three parts.  First, the baby rapidly extends his arms.  Then, just as rapidly, he pulls his arms close to his trunk.  Lastly, he cries.  When a baby feels he is falling or losing his balance, he displays this reflex.  It is the baby’s way of showing fear.  The Moro reflex shows for the first four months of life and then subsides.  If it persists beyond four or five months, the child may show sensory processing problems, anxiety, balance and coordination difficulties, poor muscle tone, motion sickness and poor impulse control.

ATNR:  The asymmetrical tonic neck reflex shows when a new baby moves her head from one side to another.  If her head turns to one side, her arm and leg on that side extend into a straight position while her arm and leg on the opposite side bend.  The ATNR reflex is sometimes called the fencing reflex because the baby takes the same pose as a fencer.  This reflex develops before birth and helps the baby navigate through the birth canal.  Usually it disappears by six months, but if it continues, it could show as several problems.

STNR:  The symmetrical tonic neck reflex shows between six and eight months of age.  When a child is on his tummy, this reflex allows the child to straighten his arms and bend his legs in order to crawl.  This reflex is needed for crawling and for developing hand-eye coordination.  As the child grows, the STNR reflex allows the child to read without losing his place and to follow his hand with his eyes while writing.

TLR:  The tonic labyrinthine reflex causes the baby’s arms and legs to extend when the baby’s head turns up, and causes the arms and legs to fold when the head bends down.  This reflex helps a baby to crawl.  Children with poor posture, or who walk on their toes, or who have trouble playing with a ball may have this reflex persisting long after four months of age.  If it persists it can also interfere with speaking because the tongue wants to extend.

Spinal Galant Reflex:  When an infant’s skin is stroked on the side of her back, she will tend to move toward the stroked side.  This helps during birth but usually disappears by nine months.  If not, problems could include an inability to sit still; a dislike of tight clothing, especially around the waist; bed wetting; and poor short term memory, making reading comprehension difficult.

How to make reading anything easier

Talk to babies, even before they are born

Recently I visited my two-month-old grandson for a week.  As much as possible, I held him.  And when he was awake, I talked to him. 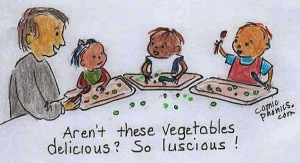 I would look into his alert grey eyes and jabber on and on—about the inch of snow expected, about a book I had read, about what a terrible burper he was.  I used the same adult vocabulary I would use to talk to you but perhaps with more inflection and facial animation.

His eyes would follow me but mostly he would listen—listen to me describing the soft, touchable fabric of his onesie, or listen to my theories about why he slept so little.  I would ask him questions. “What do you want for lunch?  Milk or milk?  Do you want to look over my shoulder or look straight ahead?  How’s your diaper?”  He stared back attentively at first, but by the end of the week when I would talk to him, he would smile, quiver and say, “oo, oo,” the only sound he could make.

We know that phonemes—the basic sound units of language—can be recognized by new babies in the weeks following birth.  Previously it was thought that babies couldn’t recognize slight differences in language sounds until the babies were several months old.  But now we know that babies’ sound perception and preference begins in the womb.

How can we help new babies to develop language skills? 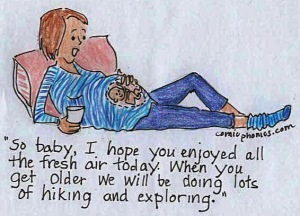 In fact if you listen to the vocabulary of a child, you can predict his success in life.  That’s how strong the correlation is between vocabulary and career success.

Teaching “and” and “but”

Learning new vocabulary words in elementary school is important for reading comprehension.  But vocabulary instruction needs to include a deeper understanding of words students use all the time, words they haven’t paid much attention to, such as the conjunctions “and” and “but.”

Helping students learn to read means pointing out the relationships which conjunctions create.  Here’s how.

Other words which mean the same as “and” include consequently, because,  moreover, and furthermore.  A semicolon between two sentences usually indicates that the idea in the first sentence continues in the second sentence.

Words which mean the same as “but” show contrast.  Some other words are though, despite and yet.

Scholastic, the publisher of so many children’s books, offers seven tips to increase reading opportunities for children on its website, http://www.scholastic.com/parents/resources/article/more-reading-resources/reading-tips-parents.  I have paraphrased them below.

Asking the right kinds of questions can help students learn, according to Robert J. Marzano*, an expert in the field.  He divides questions into four kinds, those that elicit 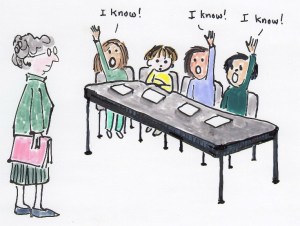 Let’s apply his ideas to some reading that children do.

For preschoolers being read William Steig’s Sylvester and the Magic Pebble,

Each level of questions becomes harder to answer, so if you use this questioning strategy, begin with details questions and work your way to harder questions. The first two levels, details and characteristics, can be asked of a group, but the other two levels require more thought and might better be considered through discussion.  Evidence-based questions might require time to answer, so might be given as homework, or be talked over again when the child has had time to consider his response.

To make this line of questioning easy on you, the parent or teacher, think details first, then genre and characteristics of that genre, then questions beginning with “why,” and last sources for more information.