When I was a child, I needed to write the word “business” for some reason.  In my dictionary, I looked up “bizness,” “bisness,” “bizzness,” and “bissness,” growing more and more frustrated as my searches ended futilely.  Then I asked my mother who told me the correct spelling.  A “u”!  Who would ever have thought a word which sounds like “biz-nes” would be spelled with a “u”? 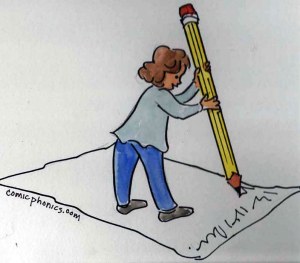 If only “business” were the only one.  English has many commonly used words which do not follow the rules of phonics and spelling.  Here are some with their pronunciations following.

Some words make sense if you point out their history or their connection to other words.  “Two” makes little sense.  Why a silent “w”?  And a single “o” rarely sounds like “oo” or “u.”  But if you explain that some other words which mean two begin with “tw” such as “twin” and “twenty,” recognizing the word becomes easier.

This entry was posted in phonics, reading strategies, sounds of English, Spelling. Bookmark the permalink.