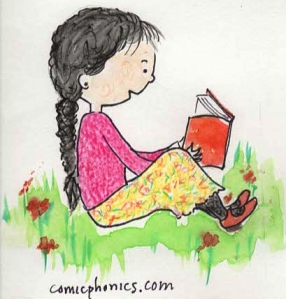 Suppose you have a reader  who  scores well on teacher assessments through first grade.  But then in second grade, she falters and starts guessing wrongly at new words.  What is going on?

It could be that this child has not learned the rules of phonics, or has learned the rudimentary rules but not the more advanced rules.  Instead, this student relies on a system of memorizing the look of words.

A child can get by for years using whole word guessing.  But then because of the sheer number of new long words, this system no longer sustains learning words with two, three and four syllables, words with prefixes and suffixes, words which must be sounded out first one way and then another to figure them out.

Research shows that a “whole language” approach to learning to read—that is memorizing new words—doesn’t work nearly as well as a system based on phonics.

I have worked with many students who can sound out one- and two-syllable words but who guess at longer words.  They say a word which begins the same way as the longer word but which doesn’t make sense.  They continue reading without stopping to consider that what they just said makes no sense, a clue that they are not comprehending what they read.

If you have a child who slurs longer words or who substitutes a word that begins the same way as the original word, this child probably needs advanced phonics work.  By advanced I mean learning rules for splitting long words into parts and for understanding how prefixes and suffixes attach to a root word and change the pronunciation and meaning of a root.

Even after children can read, they need to continue to work with phonics.