However, in New York 220,000 students “opted out” of taking the test in May. 220,000 students is about 20% of all students who should have taken the English exams. That is the highest percentage of students in any state refusing to take the Common Core-aligned tests.  In some school districts the opt-out students were as high as 60% of the total. With so many parents voting against these tests by stilling their children’s number 2 pencils, what is next in New York for the controversial tests? 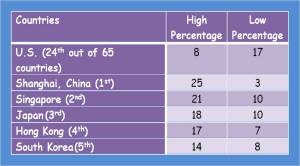 It is unlikely that the tests will be scrapped completely despite nationwide opposition to the tests. Politicians and educators know US students are not up to snuff when it comes to language and math skills. International tests results on the latest PISA reading tests (Program for International Student Assessment) show the US ranks 24th out of 65 countries, with Asian countries dominating the high scores.

This entry was posted in Common Core Standards. Bookmark the permalink.