How can I test my child’s basic reading skills so I know what skills he has mastered and what ones he needs to learn?

If your child knows a little bit about how to read, but you are not sure how much or where to begin, I came across a series of tests that might help you. 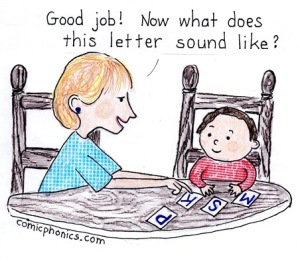 The tests are from a 1981 book by a Montessori educator, Aline D. Wolf.  She wrote Tutoring is Caring for tutors of students who are experiencing difficulty in learning how to read.  Here is what she suggests, updated by Mrs. K to suggest online resources not available 32 years ago:

First test—recognizing sounds.  With a deck of ABC’s (available where school supplies are sold) or letter tiles (Scrabble pieces or letter tiles sold as parts of games) or an online site of moveable ABC’s, ask the student to say aloud the sound each letter makes.  The order of the ABC’s is irrelevent.

You might think, “Johnny can already read some words.  I can skip this step.”  Don’t.  Your child might have memorized the look of certain words the way a two-year-old can recognize “McDonalds” without being able to read.  Or he might have had a certain book read to him so many times that he can say the words from memory.  Test the letter sound of every letter.

A word of caution:  Test the letter sound, not the letter name.  This is not a test of ABC’s.  It is a test of the sound that the ABC’s make.  For vowels, listen for the short vowel sounds.

Another word of caution: Certain letters—a, g and q—can be written different ways in different type faces.  The child needs to recognize the common ways these letters are written as well as recognizing capital and lower case forms of every letter.  If you are writing the letters yourself, show all the common ways these letters are represented, but in general, use the letter form children use when they print.

If the child knows none or few of the letter sounds, begin by teaching some consonants that are generally pronounced the same all the time.  You don’t need to teach them all before you begin the vowels.  Teach ones that look different (not both “b” and “d,” or “m” and “n” or “p” and “q”).  You might start with “b,” “g,” “n,” “s,” and “t,” for example, and then add a short vowel sound (not i or e for starts since they sound so much alike).  From these few letters you can form words and show the child how words are formed.  He should be able to maneuver the cards or tiles or online letters to form words and to pronounce them.

Second test—combining the sounds.  Once the child knows the alphabet sounds, ask her to construct words by moving the cards or tiles around.  Have the child use all the letters.  If this is difficult, brush up on the sounds she finds troubling and try again.

Third test—reading simple words with short vowel sounds.  Create a list of CVC words and ask the child to read them.  You can find lists of such words online, or you can create your own list.  Try to use all the letter sounds.  If the child can’t read these words with ease, Wolf suggests preparing color-coded word lists (which our blog will explain soon).  If the child can read these words, move on to the fourth test.

A word of caution:  Blends are two or three consonants which together sound exactly like they sound when used separately.  The “s” and “t” in “stop” sound like they should in “sit” and “Tom.”  Don’t introduce digraphs at this point, that is, two or three consonants which, when used together, create a completely new sound.  The “t” and “h” in “the” do not sound like a “t” and “h” in Tom and hen.

Fifth test—reading short vowel words with two syllables.  You can find word lists online, or in some workbooks, or you can create them yourself.  Make sure each syllable uses a short-vowel.  Blends are okay.  If the child can’t do this, Wolf suggests a method to teach two-syllable words which our blog will talk about soon.  If the child can read these words, move on to the sixth test.

Sixth test—reading words with digraphs or unusual consonant sounds.  Now introduce a word list of about 25 words that uses sh, ch, th, wh, qu, ck, tch, ce, ci, ge, gi, gy, and other unexpected consonant pairings.  If the child can’t read these words fluently, a future blog will explain what to do.  If he can read the list, move on to the seventh test.

Seventh test—reading words with long vowel sounds.  This list should consist of about 25 one-syllable words with various patterns of long vowels—a silent “e” at the end; twin vowels side-by-side; two different vowels side-by-side, including “y”; “-ight,”  “-ild” and “—ow.”  If the child has trouble, then begin teaching long-vowels; if not, proceed to the final test.

Final test—reading words that cannot be pronounced using rules of phonics.  These words are exceptions to every rule—“should,” “was,” “mother” and “do,” for example.  They are sight words whose sound must be memorized.

If the child can score well on all these tests, and the child is still having difficulty reading, Wolf suggests that the problem is not decoding.  It might be fluency, phrasing, or comprehension.

This entry was posted in ABC's, letter sounds, methods of teaching reading, phonics. Bookmark the permalink.