For almost twenty years we have known that the best way to teach children to read is by focusing on phonics—pairing the sounds of English with one or more letters and then joining those sounds to form words. 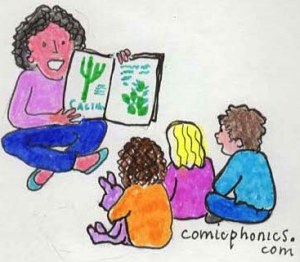 But in the US from 1967 to the beginning of the 21st century, another method was thought to be better, a method known as three cueing.  It was proposed by Ken Goodman, a university professor and noted reading expert, who believed that readers predict what words mean using three cues:

Goodman said we read by guessing at words based on the three cues.  His ideas replaced the two reading methods then in use:  memorizing whole words as in the Dick and Jane books from the 1930s (“Oh look.  See Spot.”) and using phonics to decipher words (as popularized in the 200-year-old McGuffey Readers series).

A similar method that some teachers might be more familiar with is the “MSV” reading method.  Similar to three cueing, MSV is a system developed by Marie Clay of New Zealand.  The “M” means figuring out meaning, often from contextual clues; the “S” means sentence structure, or figuring out what part of speech is needed in a particular sentence; and the V means visual information, or the look of the letters in the unknown word.

Goodman’s approach became known as “whole language” and became popular in the US.  Clay’s approach led to the Reading Recovery program, a first grade reading intervention program started in New Zealand and now found all over the English-speaking world, including in the US.

But eventually research proved that both of these approaches were not as effective as phonics.  More about that in our next blog.