Letters are visual representations (drawings) of sounds.  Nothing in an “a” inherently connects it with the sound we make when we say “a.”  “A” means the “a” sound only because we readers agree that it does, the way we agree that a green light means go or a “?” at the end of a sentence means to raise our voices to a higher pitch. 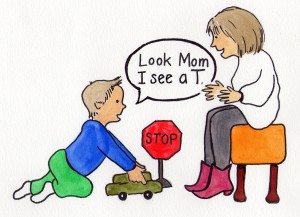 In English we have 26 letters, some of which are duplicates of the same sound.  For example, “c” and “k” can both indicate a “k” sound.  Some letters represent multiple sounds.  “S” can indicate both an “s” and a “z” sound.  And some letters, when paired with another letter, can represent a sound different from the sound either makes separately.  “Th” does not indicate a “t” plus an “h” sound, but a separate sound.

In some languages, each sound is represented by a different letter.  No letters stand for two or more sounds.  No letters, when paired, represent a new sound.  There is a one-to-one pairing of sound to illustration.  If only English were so simple!

The 42 distinct sounds in American English can by symbolized by more than 100 letters or pairs of letters (because some sounds, as the vowel sound in “cow”  have more than one way of being represented, such as “ow,” “ou,” “ew,” and “ough.”)

The fact that you are able to read this blog proves that the code of English—that is, the pairing of sounds with letter symbols—can be learned.  Four-year-olds who start the reading process can expect to be reading three-syllable words with accuracy by the time they are nine.  That’s five years to learn the most important skill we undertake in our education, a skill we will use almost daily for another 70, 80 or 90 years.

Hard—yes, but worth the effort.

This entry was posted in letter sounds. Bookmark the permalink.