Marjorie Weinman Sharmat, the author of the early reading series, Nate the Great, died on March 12. 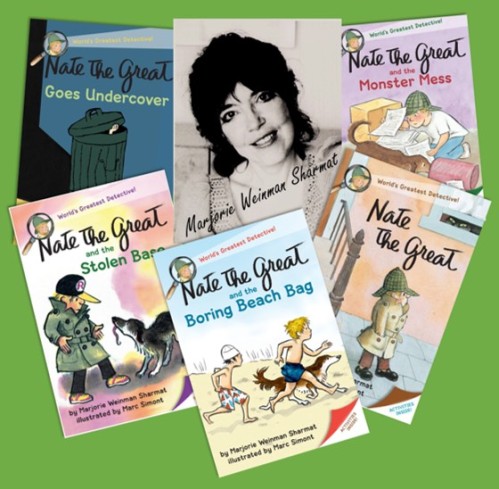 Although she wrote 130 children’s books, Mrs. Sharmat is best known for her 27-book series about Nate, the boy detective who dresses like Sherlock Holmes.  Nate solves neighborhood crimes with the help of his dog, Sludge, while sustaining himself on pancakes, lots of pancakes.

According to Mrs. Sharmat’s son, Andrew, his mother began the Nate the Great books when her own children began reading, and she realized the reading material available for early readers at that time had no story lines.  She devised simple plots using a reading vocabulary appropriate for first and second graders.

No longer read just as English primers, Nate the Great has been translated into many languages and can be found in libraries around the world.  Some Nate books have been turned into films.

I have used these chapter books with my students who love Nate’s weird friends such as Rosamond, a gothic girl with four cats, Annie and her ferocious-looking  dog, Fang, and Claude, the stamp collector.  The chapters are short and the illustrations numerous, a winning combination for both eager and reluctant readers.